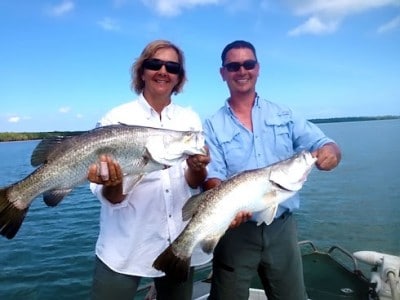 Bynoe Harbour hosts some of the best fishing grounds in the Northern Territory. Five islands are nestled in the mouth of the Harbour and the harbour coastline is made up of mangroves, fringing and sub tidal reefs, sandy beaches, seagrass and mud flat/sand flat habitats.

An artificial reef constructed from the former Crab Claw Resort Jetty that was damaged severely by a cyclone and subsequently demolished is now home to huge Jewfish, this is accessible by small boats.

The tidal creeks and gutters play host to the famous Barramundi, Salmon, Mangrove Jack, Bream, Prawns and Mud crabs while Snapper, Mangrove Jack, Javelin, Tarpon, Mackerel, Trevelly can be found around the oyster rock outcrops. The in-shore and off-shore reefs are great places for larger specimens of Golden Snapper, Coral Trout, Jewfish, Mackerel, Tuna, Trevally, Groper, the odd Red Emperor and all of which will put up a magnificent fight.

If you would like to take your catch with you we are happy to cryovac and freeze your fillets to ensure they are kept fresh and tasty.